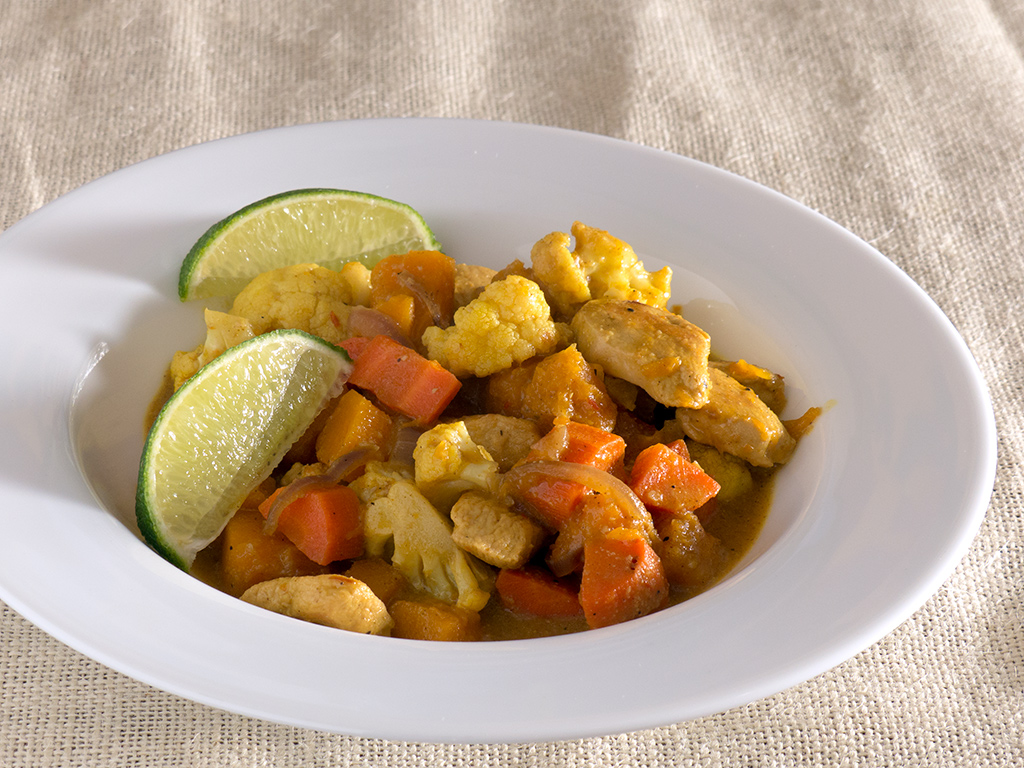 Chicken and vegetables simmered in a spicy Torchbearer curry sauce

My first blog post here was a Berbere-rubbed chicken. Spicy. A little exotic. Delicious. You probably got the idea that I like hot foods. I might even boast about it every now and again. Or, well…I may boast about it a lot. “I get my drunken noodles ‘thai hot.’” “I grow my own habaneros.” You get the idea.

The first time I tried a TorchBearer hot sauce, I was put definitively in my place. I unwittingly dove right into the deep end with their Zombie Apocalypse sauce, made from ghost chili and habanero peppers. You might assume that the name of the sauce would have clued me in, but no. I doused my tacos with a liberal helping and scarfed down the first taco and a half before I got a hint of what I was in for.

Kids – TorchBearer’s hot sauces are NOT messing around.

In my defense, most of the TorchBearer labels feature a rating front and center that lets you know if what you’re trying is “sweet,” “mild” or in the case of their Rapture sauce, “deadly.” Zombie Apocalypse features no such rating. I figured I could handle it, but the subsequent tears and gulped glasses of milk were proof I had no idea what I was getting myself into.

Let me introduce TorchBearer Sauces. Vid, Ben and Tim started the central PA-based company 10 years ago this week (Happy Birthday, guys!). It is truly a local endeavor – the three founders are locals, the labels are designed by local designer Hauck Interactive, and their wares are hawked by many central PA friends, including local celebrities and bloggers Sara and Tierney. 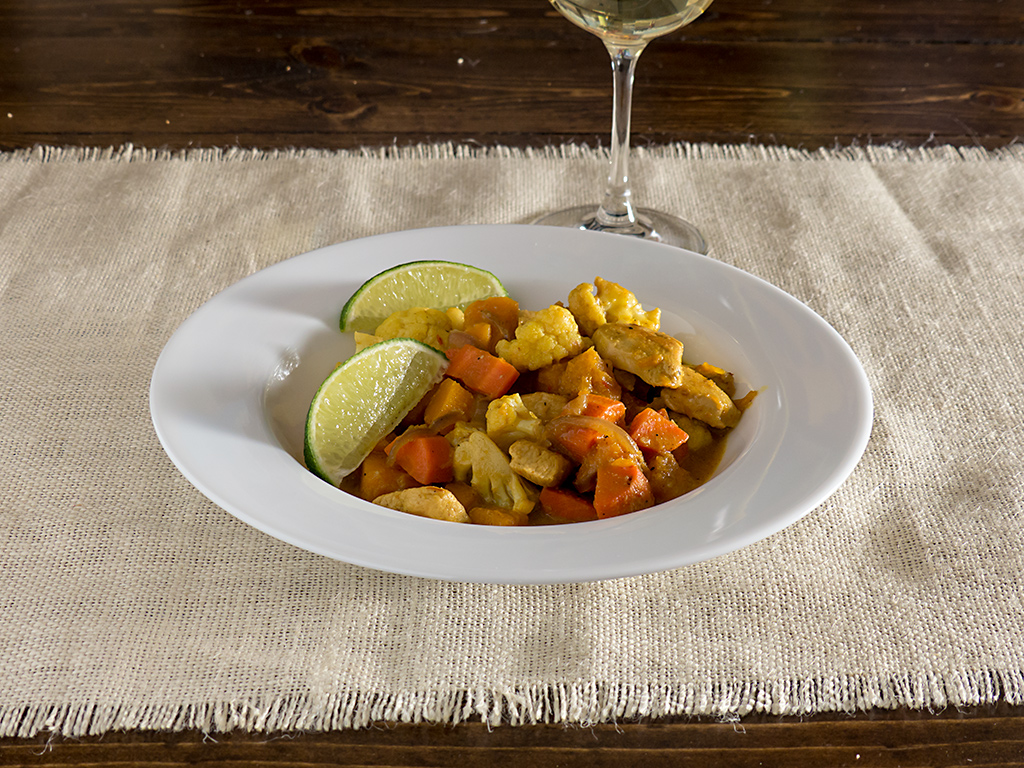 This recipe winds up spicy, but you can easily adjust the heat by adding less curry sauce

TorchBearer started when the boys had an excess of habaneros and decided to make a habanero preserve. I get that. I grow habaneros every summer, and often wonder what to do when I suddenly have 20 ripe habaneros on my hands. (This summer I’ll share a sweet habanero hot sauce recipe that is amazing on fish tacos.)

After realizing they had an amazing creation on their hands, the boys decided to go for it. They perfected their sauce, set out for their first hot sauce festival, and took home three national awards.

Now 10 years later they have over 20 products, ranging from mild but garlicy fan favorite Oh My Garlic!, to spicy wing sauces and salsas, to super, incredibly-mouth-blisteringly-hot sauces made with Ghost Chili and Trinidad Scorpion peppers. Their hottest is the aforementioned Rapture, which according to the boys is the hottest natural hot sauce in the world. I have to admit, I haven’t tried that one, not even a little drop.

TorchBearer focuses on natural ingredients in their recipes, which I love. Carrots and mandarin oranges add such a nice flavor along with their sweetness that you’ll never get from corn syrup.

Since choking on that Zombie Apocalypse, I’ve come a long way with TorchBearer. My fridge is currently home to 7 mostly used bottles of different Torch sauces. One of their newest is the Psycho Curry. When I first tried it, the Psycho Curry was so new it was still in “test sauce” status (so no fancy label). According to some inside information I got today, the sauce now has the green light and is on its way to amazing hand-drawn label status.

I couldn’t agree with that decision more. The curry sauce is really outstanding. It’s hot (made with habaneros), but when dealt with correctly—not overwhelmingly so. The flavor is very bold, from the lime, fenugreek, turmeric and other spices. Overall, I think it is a good sauce to mix in with something that will mellow it out (I picked coconut milk). But if you are courageous, try it on its own. Friend-of-the-blog Sara Bozich over at SaraBozich.com made a version using the sauce straight, more like a stir-fry sauce, and she and her husband loved it. 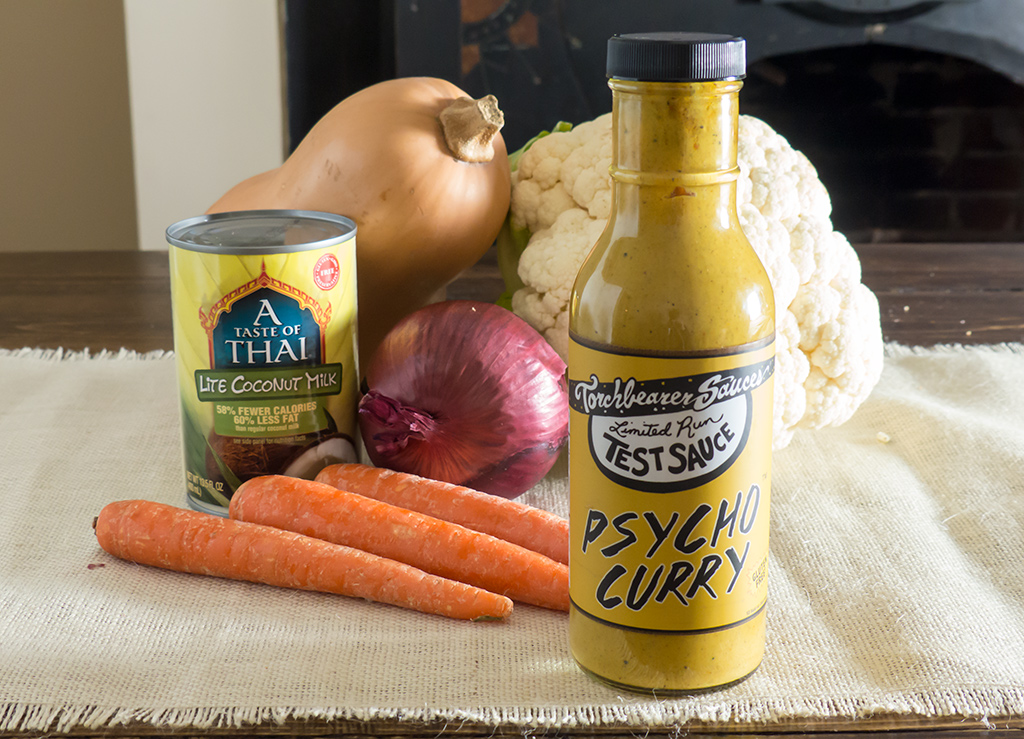 The fall vegetables work great, but summer veggies like yellow squash and peppers would be delicious too

When I first picked up the sauce, I did a little sampling of it by itself to get to know it. Like I said, it’s got a bold profile. And it isn’t a sweet curry. I wanted to put together a recipe that would tame the sauce just a little bit, but still let it shine. I picked carrot and butternut squash to bring some sweetness to the recipe; I decided at the end it still needed a little bit of brown sugar to sweeten it up a little more. And since I’ve been on a kick of using cauliflower instead of rice, I threw in some of that as well.

This recipe would work great without any meat; the veggies themselves are hearty and filling. And actually, that would make it vegan. But my husband doesn’t eat any meals without meat, so I added chicken.

You could adapt this recipe to almost any veggie and protein combo. I’ve tried this adding either snow peas or asparagus, and both were great – just watch the cooking time. Snow peas I added just a few minutes before finishing. Asparagus was a little longer. I think shrimp would be nice in it as well – again just add in for a few minutes at the end.