The first time I tried genever, the forefather of traditional gin, I was in a candlelit bar in the back streets of New Orleans’ French Quarter. Bar Tonique is a small and subdued spot that focuses on original, adapted and classic craft cocktails. The drinks you get there are nothing like the shockingly colored, overly sweetened drinks they sling down on Bourbon Street. Ahem. Pat O’Brien, I’m looking at you.

At that point, I was only just starting to get into gin. This was many, many years ago, friends. In my earlier imbibing days, I hadn’t cared for the piney scent and taste of the gins I’d had to that point. There was no appeal to a gin and tonic. Then I discovered Hendricks, with its lovely cucumber flavor. A Hendricks cucumber gimlet soon became a regular order for me. I was a gin convert.

The blood orange juice makes for a lovely-colored drink.

At Bar Tonique, after a friendly chat with the bartenders about their craft, my husband and I were offered samples of a type of gin neither of us had heard before. The bartenders poured us out shots of genever to sip, and there went my perception of gin, again.

Genever, also spelled jenever or genièvre, doesn’t taste like most gins you know. It has a malty, spicy flavor to it you just won’t find in traditional gin. Some people describe it as tasting like a mix of gin and scotch. Not being a scotch drinker (I know, I know), I can’t offer an opinion. It is still made from juniper berries, so the piney flavor is still there, but there is a different complexity to genever. 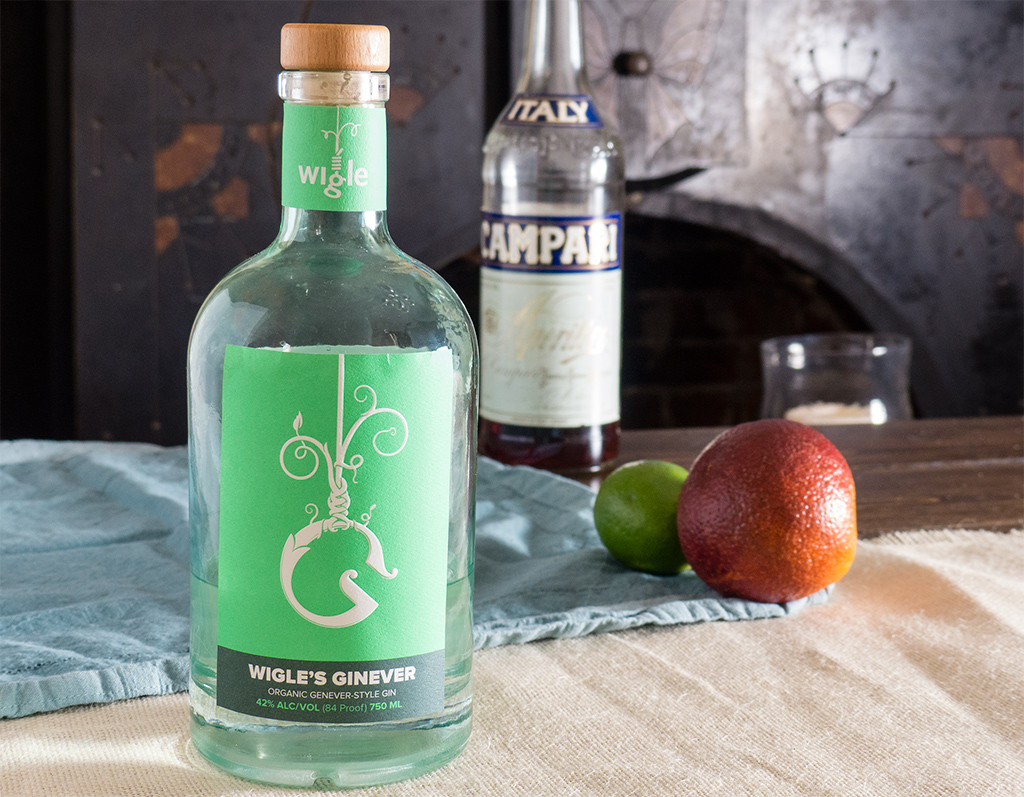 Genever is also called Holland gin or Dutch gin, and is actually the Netherlands’ national spirit. Bols Genever is the most well known. I actually haven’t tried Bols, though I want to. Bols has been distilling genever since 1664, though they revamped their recipe in 1820. They’re still using that 1820 recipe now.

Traditional genever is distilled from corn, rye and malted barley. Wigle makes their Ginever from a mix of wheat, rye and malted barley. My assumption about the funky spelling is that Wigle technically can’t call their spirit genever, as it’s a protected name. Europe has some fancy shmancy laws that genever can only come from the Netherlands, Belgium, Germany or France, similar to the restrictions around the use of the label “Champagne.”

Wigle uses the expected juniper, but also adds their own mix of herbs and spices to the mash for their Ginever. Like all of their spirits, the Ginever is made from all organic ingredients, and the grains and botanicals they use are grown locally. Wigle actually opened a Whiskey Garden in their North Side Pittsburgh Barrelhouse location last year and have started growing their own plants and herbs to flavor their spirits. 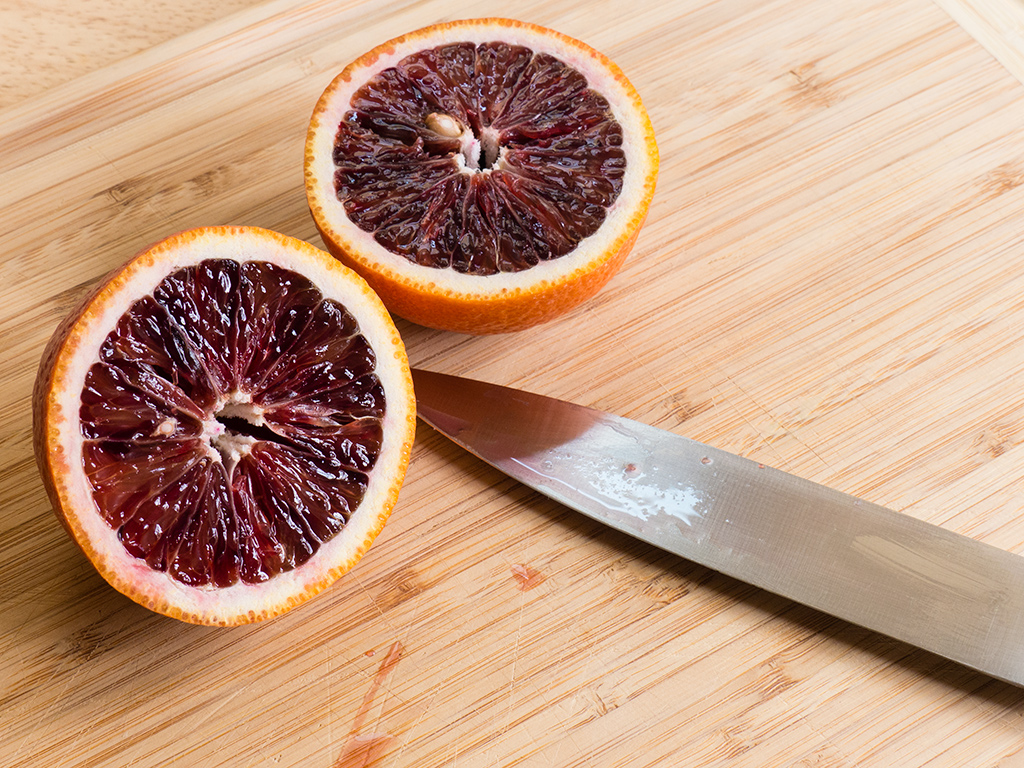 Blood oranges are a fun change from naval oranges while they’re in season.

I haven’t had Genever very much, so I can’t really compare the Wigle Ginever to a standard. But it does have the nice complexity and bold flavor that sets it apart from your standard gin. I’m not one to drink my spirits straight, but if you are this is definitely sippable.

To make a cocktail with the Ginever, I knew I wanted something that could stand up to the big malty flavor, but without overwhelming the flavor of the spirit. I decided to go for a bitter yet sweet mix, so tried out mixing the Ginever with blood orange juice. Also, blood oranges are only around for so long, and really – if you have an opportunity to make a drink that is naturally that color, you should. I used a Campari swirl in the glass as well as a finisher of orange bitters to add to the bitter profile, and some triple sec to add to the sweet orange profile. I did find in the end that the drink needed just a little something to add a teeny kick, so in went a splash of fresh lime juice. In the end, the drink is a really nice balance of the bitter and sweet sides of orange. 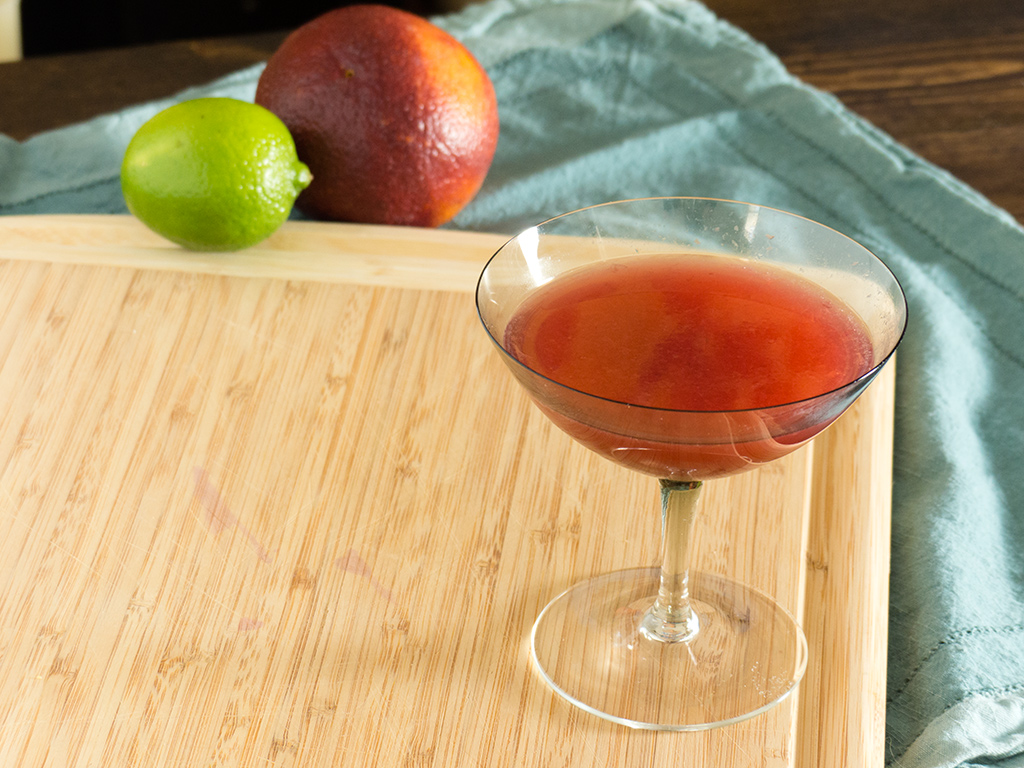 Run out and grab the last blood oranges of the season, hit the liquor store for some Wigle Ginever, and give this cocktail a try before you have to wait until next year!

Prepare a cocktail glass with:
Mix:
Finish with: