The last couple years have been pretty exciting for Pennsylvania-based spirit lovers. There’s been a rash of new craft distilleries popping up all over the state, making everything from traditional Appalachian moonshine to vodka to absinthe. And I mean rash in the best possible way. If…there was actually such thing as a good rash…which I’m not sure about…and am not about to Google.

The reason for this sudden spread of spirit makers is a change in the PA liquor code in 2011 to allow “limited distillery” licenses. These licenses are cheaper and easier to get then the old distillery licenses, and allow small distilleries to make and sell their own spirits direct to the public. Before this change, Pennsylvania had only a handful of distilleries. Now there are already 20 new businesses selling their spirits, with a number more holding licenses. Good news for the craft alcohol scene. Good news for the growing PA cocktail scene. Good news for me! 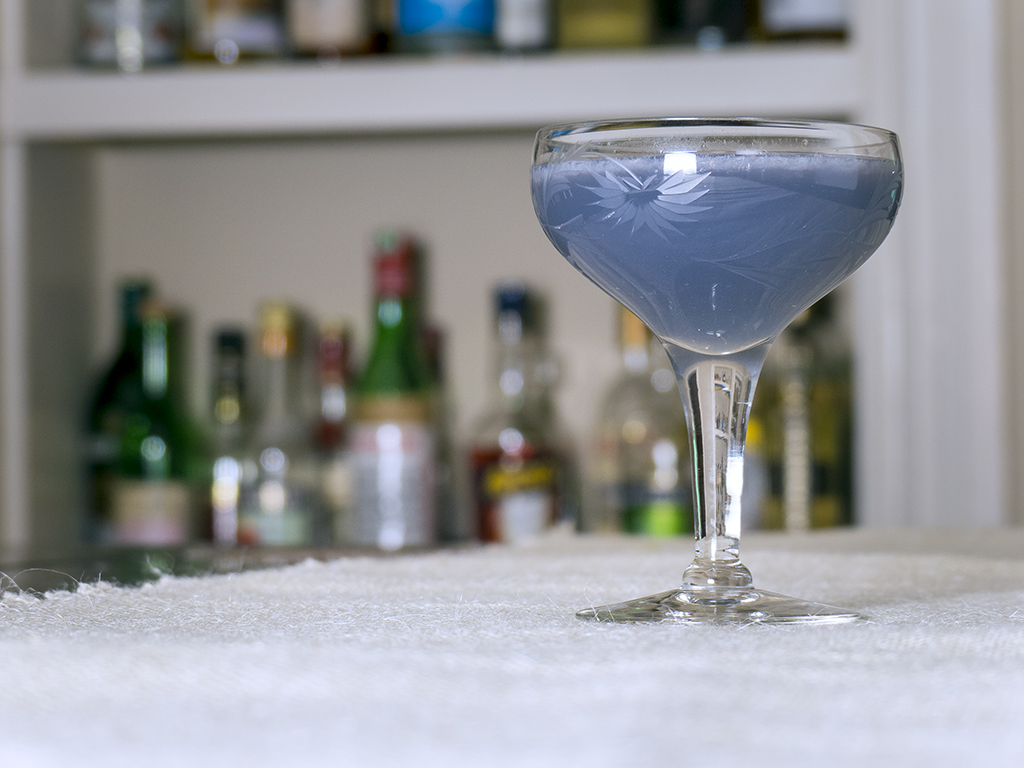 The first of these craft distilleries I’ve decided to feature is Wigle Whiskey, based in Pittsburgh. We’re going to look at a cocktail made from their Ginever, crafted by a bartender from Social at Bakery Square.

Wigle Whiskey is a family distillery, owned and operated by the Meyer family. Mark and Mary Ellen head the family, and have been running the distillery with their children since 2012. My husband, who works in the PA legislature, met the Meyers when PA was in the process of passing the limited distillery law. We’ve had the opportunity to share a few cocktails with them since and have visited with the family at their distillery and tasting room in Pittsburgh’s Strip District.

The Wigle facility is fantastic. Its location in the Strip is perfect – industrial and functional but also trendy and popular. I can vouch that they have no trouble tempting visitors to stop by and sample their spirits. “Bustling” would be a pretty apt description of their tasting room each time I’ve stopped in. You can try a cocktail or straight spirits in the tasting room, and they also do tours of the distillery to show how the magic happens. If you are going to stop by, I highly recommend you get tickets in advance, as they do sell out.

The Meyers are devoted Pittsburghers. They invite the community into the distillery in any number of ways, from bottling parties to classes to their Neighborhood Series, which is all about Pittsburgh neighborhoods. Last year they opened a new tasting room in an often overlooked neighborhood on Pittsburgh’s North Side, Spring Garden.

The new location, which the Meyers call the Whiskey Garden and Barrelhouse, serves as another site for patrons to imbibe Wigle spirits. The new place holds Wigle’s “innovation lab,” as well as a garden where they plan to grow the plants and botanicals used in their spirits. That is definitely Made From PA! Actually, Wigle’s already makes all of their products from scratch from local products. They’re one of the few distilleries that can make that claim.

Wigle’s started with their white (meaning un-aged) rye whiskey. I thought their decision to sell mini barrel kits for the white whiskey, since they hadn’t had time to age it yet, was ingenious. Also, super cute. I realize I’m essentially doing the distillery’s job for them when I use one, but I can’t help but feel special. Look at me! I’m aging whiskey! How hip am I?!

After the whiskey, they started making ginever and rum. They’re now selling the white as well as aged whiskey (both rye and wheat), ginever (white and barrel rested), and rum (white and spiced). They also make and sell their own bitters, in the traditional aromatic as well as a few unique flavors like their lovely rosemary lavender.

Since most of the Pennsylvania distilleries are new and I’m not necessarily familiar with the unique flavors of their spirits, I’ve decided to have my cocktail posts follow a pattern: first I’ll try a recipe that comes from the distillery to see how the distillery prefers to treat the liquor. Then I’ll follow up with a second post where I try my hand at mixing up a new cocktail with their spirit.

Probably more appropriate for my first cocktail made from a Wigle spirit would be to use their whiskey. It was their first product. It is part of their NAME. Rye whiskey represents Pennsylvania, and particularly western PA’s contribution to America’s whiskey history.

But nope, we’re going with the Ginever. Because I’m wild! Unpredictable! I defy expectations! Also…I like gin more than whiskey. I’m working on the whiskey thing, I swear. I had a cocktail with rye whiskey in it just yesterday, and it was delicious.

Anyway. Ginever is what I had on hand. Moving on.

Wigle’s lists recipes for most of their spirits on their website. I took a look through the Ginever recipes and was tempted by the “Avigation.” The Aviation is a classic cocktail I’m rather fond of, so I was curious what twist this version would put on the drink. The recipe comes from Chris Kuhn, a bartender at Social at Bakery Square. Social is one of many bars in Pittsburgh that is part of the cocktail revival happening all over the country. 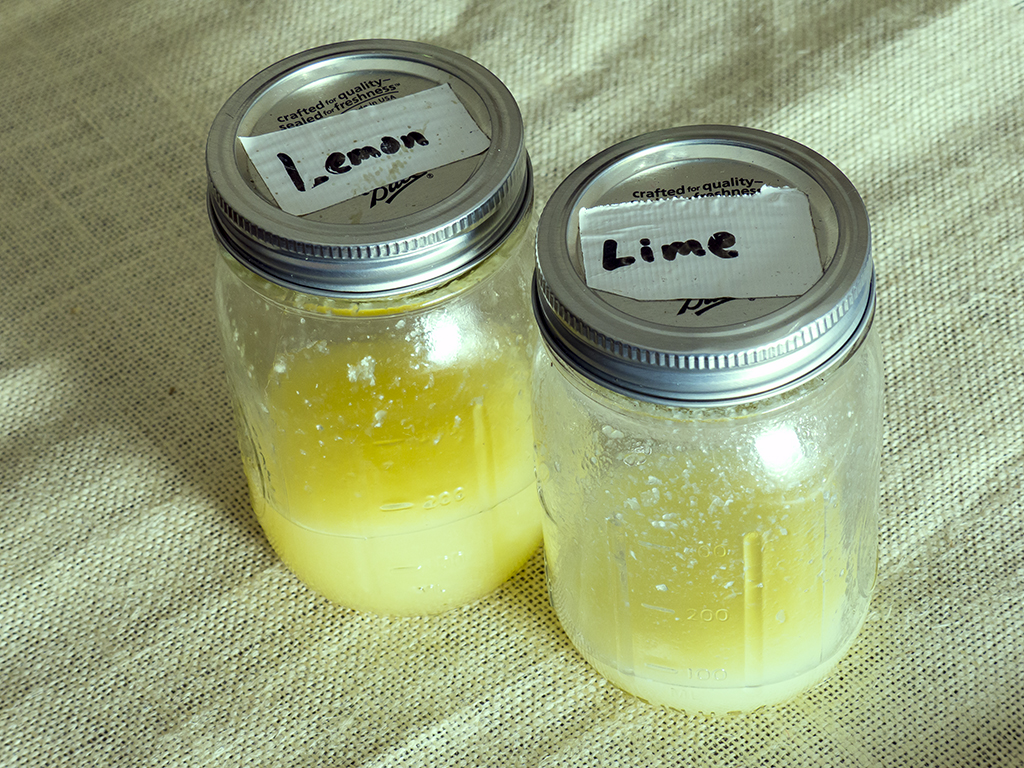 Fresh juices are essential for good cocktails. I keep extra around always.

A classic Aviation combines dry gin, maraschino liquor (no, not the red stuff from the cherries), lemon juice and crème de violette, which gives it a lovely light purple color. The Avigation keeps the crème de violette and lemon juice, but swaps the Wigle’s Ginever for standard gin, and triple sec for the maraschino. It also adds a little lime juice, and finishes the drink with Wigle’s rosemary lavender bitters.

With those switches, I expected a few changes to the drink I was used to. There would be a little more citrus tang from the lime and triple sec. I hadn’t had the Ginever before, but know that genevers are generally more malty and less piney than standard gin. The Avigation would have a heavier flavor with the Ginever than the bright flavor imparted from a dry gin.

I was mostly right. The Avigation is a nice, well balanced cocktail that has enough to pleasantly remind me of my old favorite but quite a different finish due to the Ginever, as well as the bitters. The rosemary lavender bitters add a really nice complexity – they bring yet another layer of flavor to the sweet, tangy and malty. A success overall, and a drink I’ll be making again.

This recipe comes from Chris Kuhn of Social at Bakery Square. Not a Made From PA original! Chris does a nice riff on a classic Aviation cocktail. The malty Ginever and rosemary lavender bitters make for a complex but drinkable cocktail. And its still the lovely purple color you expect from an Aviation!